She also revealed that her new album will drop “soon”….

Nicki Minaj cut Joe Budden’s microphone off in an angry spat during her Beats 1 radio show.

The ‘Barbie Dreams’ rapper-singer, who hosts Queen Radio on Apple Music’s radio platform, invited Budden to guest on her show today (August 12) as a replacement for Megan Thee Stallion. The move was perhaps a surprising one, since Billboard reports that Minaj and Budden have an “abrasive” relationship. 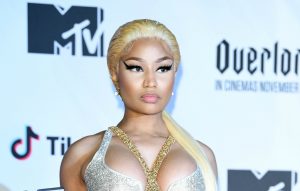 Things got heated when ‘Pump It Up’ rapper Budden accused Minaj of being on drugs last year.

“Don’t say you ain’t never popped a pill,” he said, before Minaj yelled back: “I never said that you dumb fuck! Cut his fucking mic since you wanna be dumb!

“You like tearing down women when they can’t defend themselves,” she added, promptly booting him off her show.

The Joe Budden podcast’s Mal and Rory, who were guests along with Budden, remained on the show despite Budden being kicked off. Budden quickly took to Twitter after the dispute to comment on it being a “spicy” tirade – something he said he ultimately revels in.

Elsewhere in the interview before Budden was ejected the pair talked about the controversy surrounding Minaj and Cardi B both working on Migos’ 2017 ‘MotorSport’ single. The song features verses from both women, which reportedly led to them having “bad blood”.

Minaj also said during the episode that she will release the follow-up to 2018’s ‘Queen’ “soon”.

The post “You dumb fuck!”: Nicki Minaj kicks Joe Budden off her ‘Queen Radio’ show after he accuses her of drug-taking appeared first on NME.

Source: nme
"You dumb fuck!": Nicki Minaj kicks Joe Budden off her 'Queen Radio' show after he accuses her of drug-taking

“We are facing a crisis”: Lady Gaga delivers passionate speech on mental health and suicide