Captain Marvel got her guitar from Nancy Wilson of
Heart 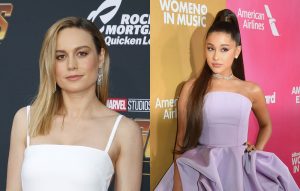 Ariana
Grande’s number one fan Brie Larson has shared a dreamy
acoustic cover of her hit song, ‘God is a Woman’.

Yesterday (August 12), the Captain Marvel star posted to
Instagram a short video of herself singing the ‘Sweetener’
track, along with the caption “*~*ariana forever*~*”. With a
glossy guitar in hand, Larson delivered delicate vocals over gentle
strumming.

Larson also thanked Nancy Wilson of Heart for gifting her the
instrument. “Big big thank you to legend Nancy Wilson for sending
me her custom Gibson guitar – I will never get over it,” the
actress wrote. Check out her cover of ‘God is a Woman’
below.

This isn’t the first time Larson has publicly showed her love
for Grande. Earlier in the year, the actress shared a cover of
‘Needy’, a cut from the pop star’s
latest album ‘Thank U, Next’, and sang
‘7 Rings’ with Samuel L. Jackson for James Corden’s
The Carpool Karaoke series.

Meanwhile, Grande will kick off the European leg of her
Sweetener tour later this week with a three-night performance at
The O2 in London. In a recent tweet, the singer said she felt
“grateful”, “grounded” and “ready” to hit the road once
again, following a short break.

feelin grateful n grounded n ready for this
next leg. love u. the most.

Grande also recently released
a music video for ‘Boyfriend’, a joint single with Social
House. She
performed the song live for the first time during her
headlining show at Lollapalooza in Chicago
before
making a surprise appearance at a Barbara Streisand
concert.

The Younger You Are, The Worse You'll Do On This Early '00s Music Quiz