“This is my Grammy” 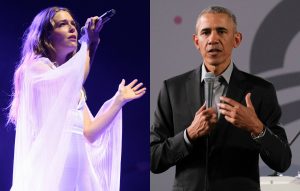 Maggie
Rogers has shared a letter she’s received from Barack and
Michelle Obama, who apologised for missing her shows in Washington
this week.

The ‘Light On’ artist performed one of two scheduled
concerts at D.C. venue The Anthem last night (October 7), and will
take to the stage there once again this evening (October 8).

After Rogers made it onto
Obama’s summer playlist this year, she’s now been sent a
letter from the former US President and his wife.

In the message, which Rogers posted to her Twitter earlier
today, the Obamas describe themselves as “huge fans” of her
music and say sorry for being unable to attend “what we’re sure
will be a wonderful couple of evenings at The Anthem”.

“Good luck on the next part of your journey – looking
forward to decades of great music from you! And we hope you and
your crew enjoy spending a little time in D.C.,” they wrote.

i have never before cried at the sight of my
full name. i love you mr + mrs o. this is my grammy. pic.twitter.com/KgHPpWX4gR

Captioning the snap of the letter, Rogers said: “I have never
before cried at the sight of my full name. I love you Mr + Mrs O.
This is my Grammy.” See the image above.

Maggie Rogers ‘Heard
It in a Past Life‘ track ‘Burning’ featured on Barack
Obama’s summer playlist, which was shared in August. In response
to the special nod, Rogers
posted a video of herself screaming to the camera on Instagram.
“Interrupting my vacation social media celibacy for this
important @barackobama message,”
she wrote at the time.

Lizzo‘s
‘Juice’, The
Black Keys‘ ‘Go’, Lil Nas X and Billy Ray Cyrus‘
‘Old Town Road (Remix)’ were also among those on Obama’s
list, which was topped by ‘Too Good’ by Drake and Rihanna.

Earlier this year,
Maggie Rogers made her return to Glastonbury with a performance on
the Other Stage. Speaking to NME ahead of her set, she
described the festival as “the anti-Coachella” and highlighted
the significance of the show.

Build A Wedding Playlist To Find Out Your Ideal Honeymoon

How Much Random Knowledge Do You Have?