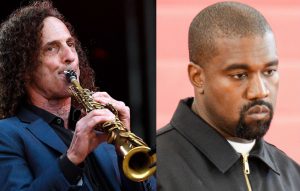 Kenny G has spoken
out about a track he recorded with Kanye West which he hopes
will make it on to the rapper’s
new album ‘Jesus Is King’.

The saxophone star said the collaboration came about after
he performed in West
and Kim Kardashian’s house earlier this year to mark
Valentine’s Day.

He told
GQ: “That was the day that I met Kanye. And he just could not
have been nicer. It was super fun. And it was a great vibe doing
that performance in their house. After that, he asked me if I want
to come over to see his studio. So I said, ‘Cool’. So I went
with him. And he started playing me some tracks. And as he was
playing the tracks, I did not hesitate to say what I thought about
the tracks. And I suggested on a particular track, ‘You know, I
think if my saxophone was on there it would sound really good’.
And he said, ‘Cool’. And he pulled out the microphone, and I
started playing on it.”

G added: “I wanted to put what I felt would be my best stuff
on it, so I asked if I could take the track to my studio and just
work on it in my little laboratory where I do all my stuff with my
particular EQ and reverb and sounds that I like. And he said,
‘Fine’. So I took the track home, and I played a bunch of stuff
on it and gave it back to him. And then basically, he’s got that
and from there I think he’s using what works in his mind for his
arrangements. So I’m sure it’s gonna be really cool.”

It is unclear whether the track will make it on to West’s new
album but G said it has already surfaced online.

“Basically, I’ve heard little snippets from people that put
it out online. But I haven’t heard the final song. I’m sure
it’s cool. What I heard from the little snippets people posted
online sounded good,” he said.

According to fans who attended the ‘Jesus Is King: A Kanye
West Experience’ in Detroit on the album’s intended release
date last month, the record will feature Kenny G.

Meanwhile, Young
Thug recently
asked West if his verse will still feature on his upcoming
album.

The new record was meant to be released on September 27 but did
not arrive.
West’s wife Kim Kardashian West then said it would be released on
September 29, however that day passed without an album too.

The post
“It’s gonna be really cool” – Kenny G on how he (probably) made it
onto Kanye West’s new album ‘Jesus Is King’ appeared first on
NME.

Source: FS – News – Music
"It's gonna be really cool" – Kenny G on how he (probably) made it onto Kanye West's new album 'Jesus Is King'

I Used To Be Obsessed With Norah Jones